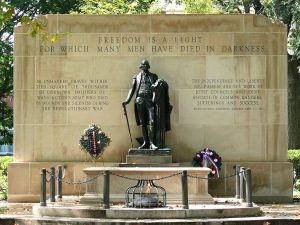 Here’s one of the first takeaways about Washington Square… It’s one of those phrases that has tons of disambiguations on Wikipedia. Goggle goes bonkers when you introduce it to its search engines. Every place in the states has a Washington Square. It’s an incredibly popular name, and every single one of them has a ghost. It’s part of a tradition. Nevertheless, what really makes Philly’s Washington Square unique is that whether you believe in Slimer or not, there’s no denying the fact that it has more cause than any to attract the supernatural. The place might as well be an ersatz Hellmouth. It has it all… and today we’re going to give you the story on why Washington Square in Philadelphia might in fact be a state indorsed – free-of-charge – haunted house.

The 4-1-1 on Washington Square

Washington Square was originally named in 1682 Southeast Square. It is a sprawling park of about 6.4 acres in the center of Philadephia. In 2005, the National Park Service took control of the park and its administration. It is now part of Independence National Historical Park.

Throughout the middle part – the boring historical part – of the 18th century, the area was used to feed animals and allow them to graze. As Colonists started coming in from all over Europe, the community around the place started ballooning. Full of all manner of go-getters. It became a thriving neighborhood and one that was mostly built on the backs of slaves or “free negros” exploited for pennies.

As you can expect, the living conditions for manual labor weren’t up to snuff. The city’s African American community started to fall ill and eventually die… in substantial numbers. It was a poor community and unlike those fancy pant Europeans they couldn’t put up vast tombs or gravestones for their dead. They need a quick remedy. Light bulbs went on – although electricity hadn’t been invented so let’s say a “spark fizzed to life” – and Washington Square followed the example of New York‘s Greenwich Village and became a Potter’s Field.

If you died, with a penny to your name, then the city or your friends would ferry you on their shoulders, fireman style, and drop you off at the Square.

Then, at the tail-end of the 18th century, all hell broke loose. The rowdy Rebels went all Luke Skywalker on the Empire across the pond. Ground zero, in many ways, was Philadelphia. The Revolutionary War was kicked into high gear and citizens and troops from the Colonial Army started dropping like flies.

Here’s the thing about dead bodies, after less than a day they become cauldrons for all manner of deadly diseases. The head honchos needed to get rid of all those body parts, pronto, otherwise they’de have to deal not only with Red-Coats but with the forefathers of COVID and other pathogens. Answer? You guessed it! Washington Square. Animal, plant, mineral, and everything in between were shoved into huge burial pits in the middle of the square.

After the Revolution, the place sort of became the go-to spot for disposing of bodies. Poor and destitute? Shoved into Washington Square. Jane or John Doe knifed in the middle of a dark alley? Off to Washington Square. Leftover dead from the Civil War? We have room at the Square. A killer, vagrant, knave, highwayman? Washington Square! If you didn’t have the dough for a burial plot the city would graciously jostle you into a comfy mass-grave.

And while all of this was taking place, cattle markets were set up around the Square, and the livestock allowed to graze and fertilize the less than sacrosanct burial mound. Injury how about a dollop of insult?

It all came to a head after one of the city’s worse yellow fever epidemics. After that round of filler, the municipality realized that the square was starting to look like a ripe pimple… the tiniest squeeze and kaboom!!!

The place was shut down… Officially. Unofficially, a body or two or a dozen were rolled in below the radar or after greasing a palm or two.

In 1954, the city council met up and decide to transform the area into a proper square and to honor somebody, anybody. They started haggling as to what sort of statue to erect in the square. The obvious choice was that of the General/Porto-POTUS, Washington.

Instead, noticing that a statue of Washington in a square named after him would be overkill – not to mention that Philadelphia and New York were peppered with effigies to the man – the council decided to erect a monument to all the soldiers and sailors of the Revolutionary War; just in case, to keep up with tradition, it would still be a statue of the great man but with a HUGE caveat. The monument, entitled the “Tomb of the Unknown Revolutionary War Soldier”, was created by architect G. Edwin Brumbaugh. It is in fact an actual tomb, which includes remains disinterred, after archeological examination, from within the park from when it was a cemetery.

A quick history lesson into old-timey economics, back then everything was a profession. For example, the village idiot was a lofty, in many cases, financially supported governmental service.

One of the most lucrative business venues in the days of yore was Body-Snatching.

The purpose of body snatching, primarily in the 19th century, was to sell the cadavers for dissection or anatomy lectures in medical schools. The canards were called “resurrectionists” or “resurrection-men”. And although it was a frowned-upon practice and in many cases illegal, every town had a couple of scoundrels willing to meet the demands of academia.

Unlike grave robbing, resurrectionists didn’t steal from a crypt or a tomb personal items… they made off like bandits with the whole freaking body. And back in those days, they were breaking bank.

The states didn’t really have a guideline on the rigamarole of medical school supply and demand. It was a new country, so, for the first few years, they sort of stole strategies from the Brits’ playbook. Up until the Anatomy Act of 1832, the only legal stock of corpses for medical studies were those sentenced to death by the courts. Such judgments did not produce enough subjects for medical schools and private anatomical schools. During the 18th century, hundreds had been hung for trivial crimes. The medical schools were racing in the bodies, and teh demand was met… until the start of the 19th century. What happened? We started to play around with the concept of Human Rights. The rivulet of executions dwindled to a trickle. During those few years, only about 56 people were being sentenced to capital punishment each year; and now, the families could ask for leniency and solicit the judge not to permit the corpse to be dissected. Meanwhile, medical schools were growing and expanding; there was an uptick and suddenly, in the states, more than 500 cadavers were needed annually.

So far, we have a mass burial mound, a statue filled with bones, bodysnatchers, yellow fever, murder victims, vagrants, killers, the whole nine-yard. At night it’s not a question of whether or not you’ll see a ghost is a question of how many; the place is rampant with them.

Nonetheless, the one phantom most seen in the area is that of an old quaker woman in a black overcoat. She has a habit of scaring the bejesus out of visitors; jumping out from the bushes like a cat in a horror movie.

Who is she? Her name is Leah. Back when body-snatchers were stalking Washington Square, Leah used to live nearby. One day, she decided to protect the cemetery’s occupants and started prowling the parameter for resurrection-men. Whenever she’d spot one, she would signal the guards with a scream or a whistle. For years, until her death, Leah was a fixture in the Potter’s Field, and, apparently, she’s still keeping busy.

For more tales, check out our top ten most haunted spots in Philly article.