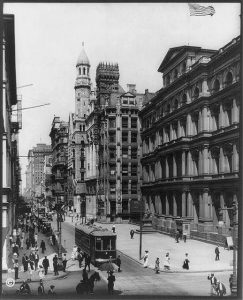 Located in the historic and affluent neighborhood of Chestnut Hill in Philadelphia, 32-room Baleroy Mansion has earned the title of ‘Most Haunted Home in America’ due to its infestation of ghosts, demons, jinns (or genies), angels, and other supernatural entities. The mansion itself has been the star feature in plenty of paranormally charged TV shows and books. Locals to the area describe it as the most haunted house in Philadelphia, and if you’re from the area, you’ve definitely heard a legend or two!

The mansion itself was initially constructed in 1911. The first owner was a well-off carpenter who is rumored to have murdered his wife inside the home. In 1925 the property was purchased by the Easby family. A year into their stay at the spacious estate, two of the Easby children played near the courtyard fountain, looking at their reflections in the water. Steven Easby, the younger of the two, oversaw his reflection as it morphed into a skull. The other brother, George, saw this change and noticed that his reflection had remained normal. The boys shrugged it off, forgetting the incident until Steven died from an undetermined childhood disease just six years later.

The family continued to have paranormal experiences in the home throughout their time there. After both of George’s parents died when he was over 30, housekeepers were hired to keep up with the mansion and George. He lived alone, however. On December 11th, 2005, George passed away at the age of 87.

George Easby was the first to experience paranormal occurrences shortly after he and his family moved into Baleroy Mansion, even before the death of his younger brother, Steven. The latter is one of the reported spirits dwelling at the mansion. Steven’s portrait even once fell and landed about 15 feet from where it was hanging. The picture wire and hook were all still intact. Steven’s apparition was also encountered by George, who he saw standing at the foot of his bed when he was still a child.

Employees of the mansion have even reported encounters with the spirit of Steven Easby, saying that they feel watched the entire time they were on shift. One employee, David Beltz, even stated that when he and a coworker were outside working on the grounds of the mansion that “I noticed a person looking out the window at me, a young kid with blond hair. He had his hands on the sill and was looking down toward the yard. I said to my buddy, ‘Look at that little kid.’ Then it just faded off, and my buddy said, ‘Man, that was really strange.” David’s coworker never returned to Baleroy after that day.

Another reported spirit is supposedly George and Steven’s mother, Henrietta. Described as reserved and proper, she has been communicated with by paranormal investigators on more than one occasion. Other spirits dwell alongside her, including the previous owner, an elderly woman, who accosts visitors with her cane. Those in the home would hear knocking and footsteps and see shadow figures. Some have even seen the ghost of Thomas Jefferson. Even though he had never visited or lived in Baleroy, George owned several artifacts that belonged to the late President. Phantom cars have been witnessed driving up towards the home, later to disappear when one would go out to investigate. A minister visited the house and was attacked with a flying antique pot, which shot towards his head with extreme force. The electricity in the home goes on and off for no discernable reason, and visitors, ranging from family members to housekeepers, have seen and heard these entities. George Easby made peace with all of these happenings and entities, and invited all of them to indefinitely stay on the property, or at least as long as they’d like.

The Blue Room and The Chair of Death

Deep inside the bowels of the Baleroy Mansion on the second floor is an infamous 18th-century drawing room, known as the Blue Room. Inside sits a 200-year-old blue chair, which is known only as the Chair of Death. It’s a light blue color, with floral upholstery, seemingly innocent, right? But it has been said that whoever sits in the chair dies shortly after. Four people have reportedly perished after encountering the chair, and George Easby even banned anyone from using it. The chair itself is said to have been owned by Napoleon and made by a warlock in the 18th century. How does an old chair commit murder? There are reports of a red mist that floats in and around the chair, which legend says is a spirit named Amelia who also reportedly owned the wingback antique. Supposedly this mist envelops the person who takes a seat, sucking their life force and causing their demise a few days later.

George was well aware of this spirit and called her a ‘loose-cannon,’ saying that she was not a mentally-well spirit, and to keep watch as not to fall under her spell. Being the only malevolent presence in the home, she is known to rip open doors and slam them, scaring those inside, compelling them to move towards the peaceful blue room, where she can sit them in her chair and put them under her power. The Chestnut Hill Historical Society corroborates three of the four reported deaths. Amelia has been said to follow those who sit in the chair home, stalking them. One of these unfortunate souls was a man named Paul Kimmons. He was a friend of the Easbys and had worked at the mansion for several years, never experiencing any paranormal activity. During a tour, Paul was escorting a medium, Judith Haines, around the mansion. From her first steps into the home, she exclaimed, “My God, I can’t believe how many spirits are in this house!” Being the skeptic he was, Paul just continued on the tour until he, too, saw a blue mist hanging heavily all over the stairway. According to Judith, after the tour, Paul had called her to tell her that he had seen the ghost of Amelia in his backseat. Amelia then began to torment Paul, waking him in the middle of the night with squeezes to his arms, floating above him while he lay in bed, and following his every move, appearing at random times. Eventually, Paul became a shell of his former self and fell sick. He was found slumped over at work in the Blue Room, in the chair. He died a couple of days after. It’s almost as if Amelia broke him down over the course of a few weeks, feeding off his life force until his soul could take no more. Now, we don’t know about you, but we’ll take standing room only, please.

An early 19th-century mansion, filled with antiques, the site of multiple deaths, curses, and jam-packed with ghostly entities. What more could one ask for in a haunted location? We hope you’ll take a drive to this home, look up into the eye-like windows… who knows, you may even see little blonde Steven Easby staring back.

For even more on Haunted Philadelphia, check out our Top 10 article here!