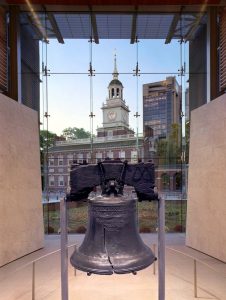 Here’s a revelation from one of our investigators… What drove them to investigate ghosts, serial killers, and the sort of lunacy that might gift any one of us with a one-way ticket to the looney farm, when he was just a tyke, 12 at the most, he used to live in the Garden State, 20 minutes from Philly. His mom used to work in that grand old town near the Liberty Bell. At least once a week they’d venture into Philly. Either dine at some fancy spot or visit one of his mom’s coworkers. The one thing all those visits had in common was… the insane-amount of horror stories they came away with. Everyone had one spook filled tale to tell them. They’d head off back home with nightmarish visions. “My house is haunted by a murder victim.” “Did you read the newspaper headline plastered on the bathroom stall? A tramp choked on her vomit there and haunts the urinals.” “This Pizza Hut was built on top of a graveyard. You can hear moanings coming from the oven late at night.” “Ben Franklin tried to get into my bed last night. What a rascal!” 4 years, that given where we he works at might have been incredibly decisive to his maturity and current state. So, given that, when he’d say “These are the most haunted spots in Philadelphia.” What he was really saying is, “there are too many to mention… But the whole freaking town is full of ghosts… Philadelphia makes Jack Skellington’s town from a Nightmare Before Christmas seem quaint.”

This old prison surely seems like a gothic tale come to life; full of dilapidated corridors, a fort-like exterior, and more scary stories than at a Clive Barker convention. It is one of the most haunted spots in Philadelphia,

There isn’t just one particular shade that’s assumed to haunt Eastern State, but and an army of specters, ghouls, and boogeymen… Too many to count. Experiences abound, and reports on supernatural shenanigans are a dime a dozen. It’s been attended, broadcast, and passed around like a cheap baton by all the great revenant hunting TV shows, including SyFy’s “Ghost Hunters” and Travel Channel’s “Ghost Adventures.”

Pop quiz hotshot, over what is Washington Square built atop? If you said graveyard, then you get a gold star and a cigar. In the 1700s, the land where Washington Square lies was in fact a potter’s field. A huge mass gravesite for bodies of African Americans, suicide victims, prisoners of war, and victims of smallpox and yellow fever. According to a note from John Adams on the nature of the grounds, more than 2,000 soldiers call this area their final resting place.

But why was Washington Square built in the first place?  “Haunted Philadelphia: Famous Phantoms, Sinister Sites and Lingering Legends,” states that the reason was to prevent more bodysnatchers from seeing the mass-graveyard as a garage sale. Back in the late 1700s, doctors used to hire mercenaries to snatch bodies from the area to use for their lectures and examinations. Rather than removing the bodies the city instead put footpaths and trees up.

THE shade that haunts the area, aside from scores of unnamed soldiers and spooks, is a Quaker woman named Leah who was dedicated to keeping the grounds safe.

Ben Franklin, that cheeky fella’, is buried on this spot. It is a Christ Church Burial Ground tradition to toss a penny onto his grave a – “a penny saved is a penny earned.”

Franklin’s spirit has been seen haunting the grounds. The man tossing the pennies back, making a raucous when possible and – due to Franklin’s Casanova ways and predilection for the female figures – pinching a shapely bum or too. The specter not exactly up to code with the WOKE movement.

Franklin has a habit of circulating around the most haunted spots in Philadelphia and making his presence felt.

This property in Chestnut Hill is apparently possessed by many of its past owners. It’s chock full of Caspers… and others not so friendly friends. One of the most pernicious spooks is that of Amelia. An evil entity that tricks folks into sitting in a “death chair.” Legend has it that whoever sits in the Fatal Furniture kicks the bucket soon after. George Meade Easby former owner claims to have known two individuals that succumbed to this malediction.

Powel House is one of those buildings in Philadelphia whose bricks have more history embedded into their red makeup than most places in the United States; if the walls could talk they’d drone and drone in filibuster fashion like a CSPAN televised event.

Specter wise? The big-ticket item – the sort of ghosts that should be prepared to take autograph request is – The Marquis de Lafayette. The residence was the house of Samuel Powel, mayor of Philadelphia both before and after the American Revolution. Powel was chums with Lafayette as well as George Washington… All three every-so-often meeting postmortem for a late-night cup of cherry.

According to the book “Spirits of ’76: Ghost Stories of the American Revolution“, the house is also haunted by Benedict Arnold and his wife, Peggy Shippen… So, yeah, bring your autograph book and prepare to marvel at the ectoplasm drenched stars.

Approved in 1895, shipped and ready to unleash the dogs of war, the USS Olympia Cruiser has seen its fair dose of action, intrigue, and bloodshed.

The Olympia showed up guns ablazing at the Battle of Manila Bay in 1898 and later served in World War I. The grand old ship was decommissioned in 1922. The boat was the very same one that brought the body of the Unknown Soldier from France to the United States. Throughout its lifetime, the Olympia saw hell and spit a loogie into its eye… But, as they say,

“When you look into an abyss, the abyss also looks into you…”

And when you cough out a hairball into the void, the void returns the favor and makes you a side revenue stream as one of the most haunted spots in Philadelphia; ghosts tours abound on this place.

Supernatural sounds have been detected throughout the vessel and phantoms have been continually observed on the ship.

If you’re going to say you have a ghost, then you might as well-publicized that it’s a famous ghost. Who wants to hear about your deadbeat grandma’, the no-one knew, making a scandal years after she went belly up?

If your face graces a US Dollar, no matter what note, then you haunt Independence Hall; it’s in your Forefather contract. Ben Franklin has been seen studying the Declaration of Independence in the room in which it was signed. Rangers have spotted Hamilton; no doubt trying to access YouTube and discover when exactly he learned how to rap. Washington and Jefferson have been caught mid-squabble.

The area is jam-packed with historical figures..

Lions, giraffes, and gorillas… Oh my… oh, and a wraith or two; although the latter isn’t dully marked on the maps.

Here’s the big takeaway… The zoo is apparently built atop of an ancient Native American burial ground. That should drive home the level of Poltergeist like madness that takes place. The zoo has so many oozes filled visits that in 2010 the show Ghost Hunters did an episode on the place.

The number one rule of real estate should always be: never built anything atop a graveyard, especially if it’s an ancient Indian Burial ground. Location, location, location is all good until the zombies climb out of the dirt and chase the clients away.

One guess as to who haunts the Betty Ross House… The show Ghost Hunters – should have an affiliate or a spinoff based in Philadelphia – crafted one of its best episodes at Betty Ross’ home.

Ross’s spirit has been seen bellowing in the basement; no one knows why.

Also, if rumors and the grapevine are to be believed, there’s a sinister entity lurking about in the place. It’s not just a homely seamstress. Reports have stated that there appears to be a wraith or malicious revenant overstaying its welcome… a being that has frightened the staff to such a degree that they’ve actually jumped out of a window onto a flagpole.

Where to begin? Well, let’s talk about the walking statue. According to “The Big Book of Pennsylvania Ghost Stories,” the statue of William Penn has a predilection for walking the grounds of the Hospital. Strolling by like it’s perfectly natural for a hunk of metal to do a walkabout. Nurses, during a time, would reportedly bring patients out to watch the ambulatory statue.

And that’s not the only odd phenomenon taking place at the hospital… one of the most haunted and oldest in the country.