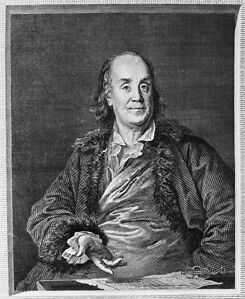 When we think of haunted structures, we start to envision something genuinely spooky. An old Victorian home where the ghost of an old lady guards the stairwell… or a graveyard filled with the ghoulish laughter of unknown children. Hauntings have a typical vibe to them, their spirits are strangers to us, nameless voices echoing throughout the night. When you dig a bit deeper, you find that many of America’s hauntings are that of more well-known specters, such as the spirits of some of the most recognizable names in American history, returning to their former haunts (no pun intended).

The American Philosophical Library is home to one of those famous ghosts – Ben Franklin.

The Life and Death of Ben Franklin

Son of a soapmaker, Ben Franklin was born to Josiah and Abiah Franklin in January of 1706. He was born in Boston and was regarded as the ‘leader’ of the boys he ran about with. Attending school until he was only ten, young Ben continued his education through voracious reading. He eventually worked for his father, and at the age of 12, he became an apprentice to his brother James, working with him in the printing trade. When Ben was just 15, he founded The New-England Courant, which was the first independent newspaper in the colonies. When denied the chance to write a letter to his paper for publication, he took up the pseudo name Silence Dogood, a middle-aged widow. Ms. Dogood’s letters became popular and were talked about among the residents of the colony. Soon his ruse was figured out by James and led Ben to be a huge advocate for free speech. When his brother was jailed for three weeks in 1722 for publishing material that was ‘unflattering’ to the governor, Ben yet again brought out Ms. Dogood and had her quoting Cato’s Letters, ‘Without freedom, there can be no such thing as wisdom, and no such thing as public liberty without freedom of speech.’

Ben soon left his apprenticeship without his brother’s permission, and in doing so, became a fugitive. At the age of 17, he ran away to Philadelphia, seeking a new start in a new city. He worked in printing shops around town but felt unsatisfied with the way his life was going. A few months went by when the Pennsylvania governor convinced him to travel to London and acquire equipment and help him start another newspaper in Philly. He didn’t trust the governor’s idea and instead continued working as a typesetter in a printer’s shop in London. Soon after, he returned to Philadelphia in 1726 with the help of Thomas Denham, a merchant who had employed him as a bookkeeper and clerk.

A year later, Ben Franklin, now 21 years old, founded the Junto, a group of ‘like-minded aspiring artisans and tradesmen who hoped to improve themselves while they improved their community.’

The Junto was a discussion group for issues of the time, and it paved the way for other similar organizations in Philadelphia. Reading was one of the Junto’s pastimes, but since books were expensive and rare at that time, Franklin suggested that the group create a library with each of their own books. Franklin wrote, ‘I made a proposition that since our books were often referred to in our disquisitions upon the inquiries, it might be convenient for us to have them all together where we met, that upon occasion they might be consulted; and by thus clubbing our books to a common library, we should, while we liked to keep them together, have each of us the advantage of using the books of all the other members, which would be nearly as beneficial as if each owned the whole.’ Franklin also founded the Library Company of Philadelphia, where Ben hired the first American librarian, Louis Timothee. It isn’t a surprise that Franklin’s spirit haunts a historical library, considering how much reading and the adventure of learning meant to Ben.

Ben Franklin’s personal life was quite confusing and dramatic, as he had a wife who was still married, a few children, one of which who died young due to his wife’s decision not to vaccinate the child, as well as another who was born out of wedlock and raised in the marital home not knowing who his birth mother was. When Ben was just 24, he finally acknowledged his son William. William was born on February 22nd in 1730. His mother’s identity remains unknown, but he was educated in Philadelphia and was eventually gained the status of the last royal governor in New Jersey. William was a loyalist to the king, while Ben, of course, was not. Their differences about the revolution soon pushed them apart.

Ben was a prodigious inventor, and he created many things such as the lightning rod, bifocal glasses, and even the urinary catheter. He never patented these inventions and instead was quoted saying that ‘we enjoy great advantages from the inventions of others, and we should be glad of an opportunity to serve others by any invention of ours; and this we should do freely and generously.’ It is plain to see that Ben Franklin was indeed a man of his word and believed in freedom as much as he did the power of lightning. Franklin also worked on population studies, Atlantic ocean current pattern reports, meteorology, the concept of cooling, and even invented the modern-day’ pros and cons’ list of decision making. A busy man until he died in 1790, Franklin was the spearhead of many of the questions we are still asking today. Most of his life was spent rooted in Philadelphia, where he is buried alongside his wife, Deborah.

The Haunting of The American Philosophical Library

The hauntings of the building go back in history; in fact, when in 1884, an employee of the library was knocked over by a ghostly figure rushing towards a bookshelf in the Philosophical Society’s library. When she gave the description of the rude entity, it matched that of late Benjamin Franklin. Even stranger, Ben’s statue is actually said to get up from its stone seat and dance in the streets outside of the library. This report has come from multiple visitors, even some who don’t know the history and habits of the statue. The statue is said to leave its pedestal and waltz around the streets surrounding the building. Shortly after Franklin died, people reported seeing it making its way towards Franklin’s house. Other reports state that it visits local pubs like City Tavern.

Whether or not Ben Franklin reanimates his statue to gallivant around Philly remains unclear, but wise words from Ben Franklin’s crypt keeper ring true. John Hopkins, the caretaker for the Christ Church Burial Ground, stated that ‘if anything, if Ben Franklin haunts the city and the street of Philadelphia, he haunts it with his personality and his invention and his creating the Philadelphia character. I also believe — You know, people come by, and they see his gravestone over there, and it’s very plain looking and very simple, and that is what he wanted exactly. I think Ben Franklin knew that the city of Philadelphia would be his epitaph and his stone because you can’t walk down the street in Philadelphia — I was just watching the fourth of July parade, and just about every other float had something to do with Ben Franklin, either something he created or something he was involved in, or there were the masons, and the fire department, or someone portraying him. Philadelphia is his epitaph. There are all kinds of restaurants and beer distributors and things named after him. He is Philadelphia. As I said, you can’t walk anywhere without feeling his spirit in that sense, which is not in a ghostly sense, but in a spiritual sense of him being the spirit of Philadelphia.’