Posted by amber in Philly Ghosts 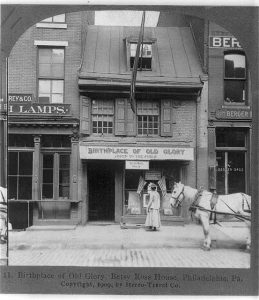 Just several blocks away from Independence Hall and the Liberty Bell lies a skinny slice of history, the Betsy Ross House. The home itself was built over 250 years ago, and it is said that Betsy Ross herself lived there from 1776 to 1779. Why is this tiny little heritage home an important part of American history? Betsy Ross was the woman who designed and sewed the first-ever American flag. Tradition tells that General George Washington and two members of the congressional committee visited Mrs. Ross in 1776. She convinced Washington to change the shape of the stars in a sketch of a flag he showed her from six-pointed to five-pointed by demonstrating that it was easier to cut the shape of the five-pointed star. Ross made flags for the Pennsylvania navy during the time of the American Revolution and was an avid flag-maker for over 50 years.

For more than 150 years, the house served as both a business and a residence for many different owners. It saw the likes of a shoemaker, drugstore, tailor, a cigar shop, and even a tavern at one point! In the 1870s, the Mund family moved in and took advantage of the home’s history, posting a sign outside that read ‘First Flag of the U.S. Made in this House’ By the later 1800s, most of the other colonial-era buildings on the block of Arch Street were torn down and replaced with larger and more modern industrial buildings and warehouses. Many Philadelphians feared that the Betsy Ross house would face a similar fate. In 1898, a group of concerned townsfolk established the American Flag House and Betsy Ross Memorial Association to raise money in order to purchase the home and save it from imminent destruction.

They were successful, and restorations were completed by 1937, and all eight rooms of the small home were opened to the public on Flag Day, June 14th, 1937. A fitting day for this home to be reintroduced into society. The entire property, including the home and the courtyard, was gifted to the City of Philadelphia in 1941. The Betsy Ross House remains dedicated to its historic mission of preserving the site and remembering the life of Betsy Ross, a working-class 18th-century tradeswoman. The home is even filled with antiques and the personal belongings of Betsy and her family.

Betsy Ross was born Betsy Griscom on New Year’s Day of 1752. She was born in Gloucester, New Jersey, and was the eighth of seventeen children. Only nine of her siblings survived through childhood. She lost a handful of siblings when she was just five years old and another two when she was ten. She was raised with Quaker beliefs and strict discipline. She learned to sew from an early age and carried that knowledge with her to adulthood. She met her husband John Ross while she was apprenticed to an upholsterer named William Webster. The couple fell in love quickly and eloped, marrying at Hugg’s Tavern in Gloucester City, New Jersey, in 1773.

Unfortunately, due to the strictness of the Quaker church, her marriage caused a split from her Griscom family, and she was expelled from the Quaker church congregation she was a member of. The young couple soon started their own upholstery business and found their way into the Christ Church, where their fellow congregants occasionally included George Washington himself.

The American Revolutionary War broke out when the Rosses had been married for just two years. As a member of the local Pennsylvania Provincial Militia, John Ross was assigned to guard munitions. He died shortly after, in 1775, when rumors state that a gunpowder explosion killed him. Betsy was only 24 years old when she was widowed and continued to work in the upholstery business, making blankets, tents, and packaged ammunition in 1779 for the Continental Army. She married a couple of times after and had a handful of children who mourned her death in January of 1836. Whether or not she lived at the Betsy Ross house is a matter of debate, but it remains one of the most visited (and most haunted) sites in the city of Philadelphia.

The Hauntings of the Betsy Ross House

A well-known haunted hotspot, the Betsy Ross House was directed by Lisa Acker Moulder when the house was featured on the popular paranormal television show ‘Ghost Hunters.’ The team of paranormal investigators from the show provided Moulder with evidence of a haunting she said surprised her; ‘I’ve certainly heard my share over the years and had a few unusual experiences of my own.  However, I have to admit to being absolutely shocked by the results of the TAPS investigation.’

Once the team arrived at the landmark home, Moulder told them of a more recent story of murder right at the house. In 1980, two security guards for the home got into an altercation in the basement of the gift shop. The fight turned really sour when one of the guards pulled out his gun and shot the other three times, leaving him overnight in the shop to die. Since then, visitors have claimed to hear disembodied voices coming from the area where the murder took place. In the parlor of the home, where Betsy is said to have met with the U.S. flag committee, witnesses state that they feel a very dark and foreboding presence in the room with them. Other visitors and staff members have heard rustling and voices coming from the basement of the house itself. In the director’s office, which is in the attic of the home, one former director felt a large hand grab onto her shoulder roughly and was so frightened by the experience that she climbed out of the window and onto the flagpole outside, too afraid to cross the room to escape down the steps. History states that the house’s former owner died in the room that now functions as the director’s office.

With a bit of the home’s history under their belt, the Ghost Hunters team set out to try and see what they experienced within the home. During their investigation, they captured disembodied voices galore throughout the house. One came from the basement, a man moaning. Could this be the spirit of the guard who was left to die here? A man’s voice was also captured in the director’s office, but it was too muffled for them to make out precisely what it was saying.

While spirits of more recent tragedies are seen regularly in the home, Betsy Ross herself has also been witnessed. Guests to the home report seeing a woman crying at the foot of a bed in the basement. Betsy ross not only lost her husband to an explosion as he served the country, but she also lost one of her daughters while she was married to her third husband. Rumor has it that the woman sobbing by the bed is Betsy, mourning the loss of her husband and child.

So, Pennsylvanians, have you ever visited the historic Betsy Ross House? Have you ventured into the basement of the home to see if you could catch a glimpse of Mrs. Ross herself? Regardless, this home will go down in history as one of the most influential American historical sites in Philadelphia and Pennsylvania as a whole. For more haunted sites in Philly, check out our Top 10 List here!