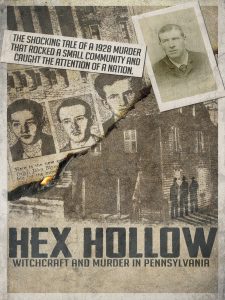 Unbelievable and unthinkable things were running amuck in early twentieth-century Pennsylvania. A brutal murder in 1928 began what was known as the ‘hex scare’ in the region, turning the authorities and general public against what had always been seen as a common practice, ‘powwowing.’ The Hex House found itself right in the middle of this commotion.

Before the tragic crime, the belief and practice of folk magic were seen as nothing more than tradition and a respect for the region’s ancestors. After the murder, folk magic became a considerable threat to the people of the area, and neighbors turned against neighbors. Folk magic practitioners were now seen as extremely dangerous and a force to be reckoned with. Soon, there was little room for superstition and hex doctors in modern Pennsylvania, as the folk medicine used for centuries was now being seen as a false treatment that kept people from getting the medical care they so desperately needed. It may seem unbelievable to more urban folk, but in the 1920s, the residents of Pennsylvania’s farms, back roads, and hollows believed that magic was alive and well.

Hex Magic in The Keystone State

Pennsylvania hex magic dates back to the earliest days of colonies, mainly linked to the Pennsylvania German or Dutch immigrants and their descendants. In Pennsylvania, the German settlers held firmly to their beliefs, customs, and elements of their culture back home. They blended customs of the Old and New World to form their distinct identity. Though there were many religious differences among the German settlers, folk magic was the common tradition that united them. For a large number of settlers, folk magic was intertwined with their Christian beliefs.

‘Powwowing’ was at one end of the folk magic scale (not to be confused with Native American ceremonial practices) and was used to provide cures for illnesses, protection from evil forces, and removal of curses. Folk magic practitioners carried good luck charms, amulets and relied heavily on prayer and ritual in their daily life. At the other end was a ‘hexerei’ or witchcraft. Practitioners of this so-called black magic drew their power from the Devil and other ungodly sources. The witches harassed their neighbors and committed criminal acts using their supernatural abilities. The term ‘hex doctor’ soon surfaced to describe those practicing hexerei. Powwowers and hex doctors often worked against one another, with the common folk stuck in the middle of their curses and cures. Folk magic flourished in this setting for more than two centuries.

Hex doctors targeted their victims in a plethora of ways. Since the community was based around a farming society, many of the hex doctor’s attacks would be directed at livestock and crops. They were often blamed when cows stopped producing milk, when healthy animals died without warning, or when crops failed to produce. Hex doctors also went after people, allegedly causing illness. A witch could also use spells to launch invisible attacks, which would cause fits of seizures. Many people also believed that they had been hexed when their lives seemed to be filled with bad luck. So how did common folk combat this unseen and unfightable force? A powwower named John George Hohman appeared to have the answer. In 1819, he compiled a book of charms, prayers, remedies, and folk medicine and called it ‘Der lang verborgene Freund,’ or ‘The Long-Lost Friend.’ The book became extremely popular, and buyers were told that they would be protected from harm as long as they carried the book. In the front of the book, an inscription read ‘Whoever carries this book with him is safe from all enemies, visible and invisible, and whoever has this book with him cannot die without he the holy corpse of Jesus Christ, nor drown in any water, nor burn up in any fire, nor can any unjust sentence be passed upon him, so help me God.’

The community loved his book, and most of the townsfolk kept a copy. Of course, an opposing book also came into circulation known as ‘The Sixth and Seventh Book of Moses,’ which contained instructions on conjuring and controlling demons. Hex doctors all around began to acquire copies of the book, but merely owning it was said to be extremely dangerous and could even be fatal. To modern readers today, all of this talk of hexes and spells sounds incredibly silly. Still, these were commonly held traditions in the Pennsylvania German settlements of the late 19th and early 20th centuries. This was real for these people; this was their belief. Soon, the Rehmeyer ‘Hex Murder’ took place in their settlement, and their ideas changed forever.

The story begins with a man named John Blymire, a well-known powowwer. Blymire had an excellent reputation in York county, and despite his success, he always believed he had a large shadow hanging over him. One day as he left the cigar factory where he worked, a rabid dog ran towards him and his coworkers. Blymire approached the beast and spoke a spell to it. Allegedly the animal’s foaming mouth ceased, and it became subdued. Blymire was even able to pet its head! His coworkers were amazed and thankful, but after this incident, Blymire’s luck began to change. He soon fell ill and started to believe that a hex doctor had placed a curse upon him out of jealousy of his healing power. Since it was thought that one could not remove a curse unless you know who placed it upon you, John Blymire was doomed to his hex and started to waste away. One night, however, Blymire had a feeling he knew who hexed him, his great-grandfather Jacob. Since he could not fight a spirit’s hex, he decided to move away from his home, which seemed to help cure the curse.

After he moved away, he met a woman named Lily and married her shortly after. The couple bore two children, but both had died in infancy. These tragedies led John to believe that his hex was still alive and well. Blymire became suspicious of everyone around him, including his wife, Lily. Since Lily started to fear for her life, she consulted a lawyer and obtained a judge’s order to commit Blymire to a mental hospital. He didn’t stay in that facility for long, and forty-eight days after he was committed, he disappeared.

John Blymire turned up at the cigar factory where he used to work in 1928. He was determined to find the cause of his curse and was even more so find out who placed it upon him. Blymire soon turned to the ‘River Witch of Marietta,’ or Nellie Noll. She identified Blymire’s enemy as a member of the Rehmeyer family. It’s all coming full circle now! When he asked which family member, she asked him to hold out his hand. When Blymire looked down at his palm, the face of Nelson Rehmeyer appeared on his clammy skin. Nelli Noll stated that to remove the curse; he needed to take Rehmeyer’s copy of ‘The Long-Lost Friend’ and a lock of his hair and bury them six feet under the ground.

Blymire and another man went to Rehmeyer’s door, asking to speak with him. Rehmeyer allowed them to stay the night as it was late when they arrived. They were unable to secure his spellbook or a lock of his hair, and they left the following morning seeking more help. Blymire decided that they needed more manpower to subdue Rehmeyer, as he was a large and imposing man. They came back the following evening, November 27th, and tackled him to the ground in his living room. Although varying stories of what went down that night exist, one happening remains the same, during the struggle, Rehmeyer was beaten and strangled to death. When they realized they had killed a man, they staged the home to look as though it had been robbed. They then doused the body with kerosene and lit it on fire, hoping the flames would burn the entire house down. This is where the story takes a strange turn. When they left, Rehmeyer’s body was engulfed in flames, but soon after, the flames mysteriously went out.

Two days later, a neighbor discovered Rehmeyer’s body and alerted authorities. The crime stunned the community, and Blymire was soon picked up as a suspect. The media coverage of the crime focused on Blymire’s obsession with hexes, and soon that was set as the reason for the murder. Soon after, many crimes following were attributed to the supernatural. Folk magic began to be blamed for all that went wrong around Pennsylvania and were labeled as ‘hex murders.’

Today, the home sits in a hollow, known as Hex Hollow, vacant. Descendants of Nelson Rehmeyer and its new owners have been trying to turn the house into a museum to display Nelson’s life and his murder. The home is said by locals to be haunted and is still furnished with many of Rehmeyer’s original belongings. A portion of the kitchen floor has even been covered over the glass, with the scorched floorboards beneath it – the area where Blymire started the fire.

Accounts from local residents tell of shadowy figures lurking around the property when no one is there. Others state that if you throw pebbles at the home, it will throw them back at you. Disembodied voices have also been recorded in the forest surrounding the home, and a black dog with red eyes, a symbol of death, has been spotted roaming the property.

This home remembers the tragedy that occurred here, and many believe that the house itself is cursed, which is why it refused to burn down despite its very flammable construction materials. What do you think? Have you ever driven past the Hex House? If you’d like to visit yet another haunted home in Pennsylvania, we recommend checking out the famous Hill View Manor!